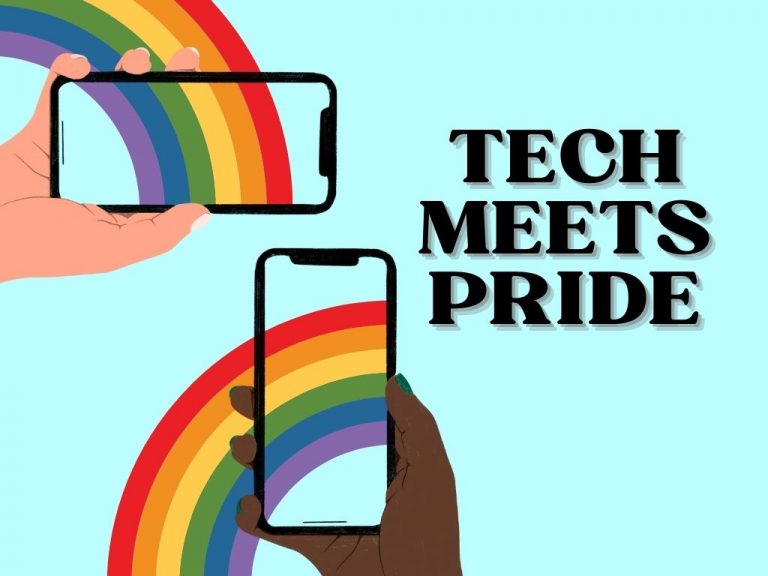 Internationally, the month of June marks Pride Month, celebrating the authenticity, acceptance, and rich history of the LGBTQ+ community.

Pride Month falls around the anniversary of the Stonewall riots, a series of justice-fueled uprisings in 1969 New York, inspiring queer people to fight adversity. This indicated a turning point for the community, as LGBTQ+ people had finally stood up against constant police raids and violence in an impactful way. Since, the community has made large strides for equality of queer people, and commemorates Stonewall annually with parades and protests.

The recent ubiquity of digital technology has helped raise awareness for queer people’s rights around the world. With the growth and diversification of social media, the rapid spread of 24-hour information and increase of accessibility, technology can connect LGBTQ+ people more efficiently than ever before.

A considerable percentage of people worldwide self-identify as LGB [About 9%], trans and non-binary [about 1%], and considering varying levels of acceptance depending on region, it’s important to emphasize safe online platforms that reach the growing community.

Meta’s new features focus on avatars as a form of individualism in a digitized world, connecting to Pride’s message of authenticity. In early 2022, CEO Mark Zuckerberg announced that the new artwork would show avatars “with a lot more expressions, faces and skin tones, as well as wheelchairs and hearing aids,” correlating with Pride’s intersectional message.

While working with Instagram on her digital Pride collection, Brooklyn-based, lesbian illustrator, Shanée Benjamin gained the opportunity to share her art with the world. The self-taught designer’s Insta following lands at 38.8K, reaching the LGBTQ+ online community and beyond.

Tech Made For Lgbtq+ People

Such Pride initiatives are not exclusive to corporations the size of Meta; smaller platforms also  provide safe spaces for LGBTQ+ people. Website Lavender Book, for example, provides users with a crowd-sourced search engine for finding queer-friendly spaces in their areas.

On Lavender Book’s interface, users can filter the database to find restaurants, bars, venues, hotels and other facilities, including options for trans-owned and black-owned spaces, and those with gender-neutral restrooms. This mutually beneficial relationship between queer businessowners and consumers demonstrates the power of tech on the community.

Tech and Pride also intersect through apps like Voda, a mental health app designed by queer people, for queer people. Voda understands the unique struggles and setbacks of the LGBTQ+ community and provides digital mental-wellness support catered towards user’s needs. In a testimonial, Voda user Kayla M. said, “with this app, I can be honest without fear of any judgment.”

With cyberspace connecting LGBTQ+ users worldwide and providing helpful tools, there are also inevitable downsides to a free range of the internet. LGBTQ+ individuals are highly at risk of enduring harassment online, further intensified by the anonymity users can have on the internet.

Data breaches exposing individual’s sexuality against their will is also a major issue, especially in areas where discrimination and violence occur regularly. In particular, queer dating app users are at risk of having their identities and locations revealed by platforms that utilize targeted ads and GPS-services.

With online harassment and data breaches posing a potentially fatal threat to LGBTQ+ people, tech giants must combat this issue in order to provide a safe space for their users. Meta recently announced an LGBTQ+ Safety Center Hub on FaceBook to fight against harassment and streamline the reporting process.

The Need For Change

The history of harassment towards marginalized groups on Meta’s platforms proves the need for increased safety measures. Decorating the site in rainbows and collaborating with queer artists brings visibility to the community, but monitoring and removing hate will improve their security.

On platforms like Twitter, where online harassment even occurs within a 280 character limit, the social media’s community guidelines outline that they are working towards creating a space free from abuse and hate speech. By consistently removing harmful content, suspending hateful accounts and promoting an environment of respect, Twitter has the potential to combat hate speech on their platform.

Technology and the digital world holds the power to uplift communities, bringing queer people together across the globe. Pride Month serves as an important opportunity to reflect on the impact big tech has on the LGBTQ+ community. To make a lasting difference, however, queer safety and well-being should be considered and reflected upon every month of the year.